Summer Camp 2019 is finally here! Through several Radio shows we will broadcast to the world everything that the participants from Croatia, Moldova, North Macedonia, Poland, Russia, Turkey, Ukraine, Serbia and Switzerland will learn and experience during these two weeks in the Children's Village. 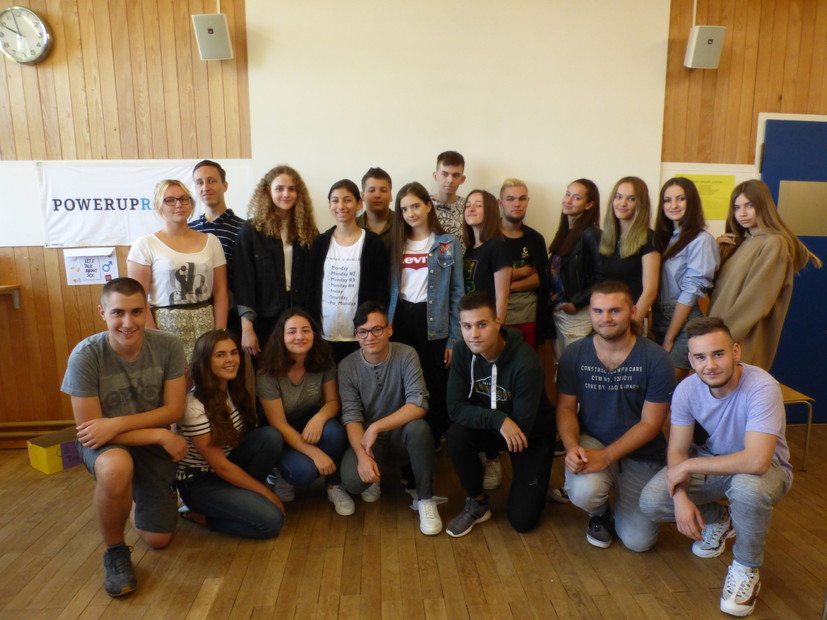 We are the Critical Use of Media Workshop and through this blog we will tell you about what is going on in Summer Camp!

Weekend in the Pestalozzi Children's Village

Last week ended for us with an amazing emotions. In saturday we’ve got a chance to see an amazing city Zurich. First part of a little journey contained of interesting and addictive quest. Each of team had to make some of challenges to get more points to became a winner. In the process we could see an exciting places, beautiful streets and interesting people. After it finishes we’re got a small lunch and got a time to walk and see the city by ourselves. We’re got an amazing time and unforgettable memories.

The next day we’revisited a Technology Museum. It was also really interesting and cognitively for all of us. We’re had much fun watching some kind of new technologies and making an experiments by ourselves. We could seen a power of energy and fascinating things with water or light.

The second part was absolutely fantastic. We’re visited Rheinfall . It is the largest waterfall in Switzerland and Europe. The falls are located on the High Rhine. Everyone enjoyed an amazing view and got a chance to get closer on a boat.

So if I’ll get a chance to visit those places for a second time l’ll do this for sure.

On the fourth day of our stay here, after breakfast we went to the Village's School to take part in the workshops. In the beginning, we felt hesitation, but it turned out, that all leaders all very friendly and helpful. At our courses we had a lot of games so we could get to know each other better. The Crital use of Media group, in which I am, went to the Radio Studio, which is located in one of Kinderdorf Pestalozzi's building. We were able to record our own jingle!

After that, we went to main square, where we had lunch all together for the first time. There was spaghetti with tomato sauce and grated cheese. For dessert we had ice creams. During the lunch, in small groups, we became radio moderators and said something into microphone, and all people in the Village could hear it! (that`s really cool and exciting). At second part of the course we could sign up for the upcoming broadcasts, made a video blog or also write for this blog. We were all very excited! In the evening, at Youth Club, there were a photo session! I think that we were all were happy. 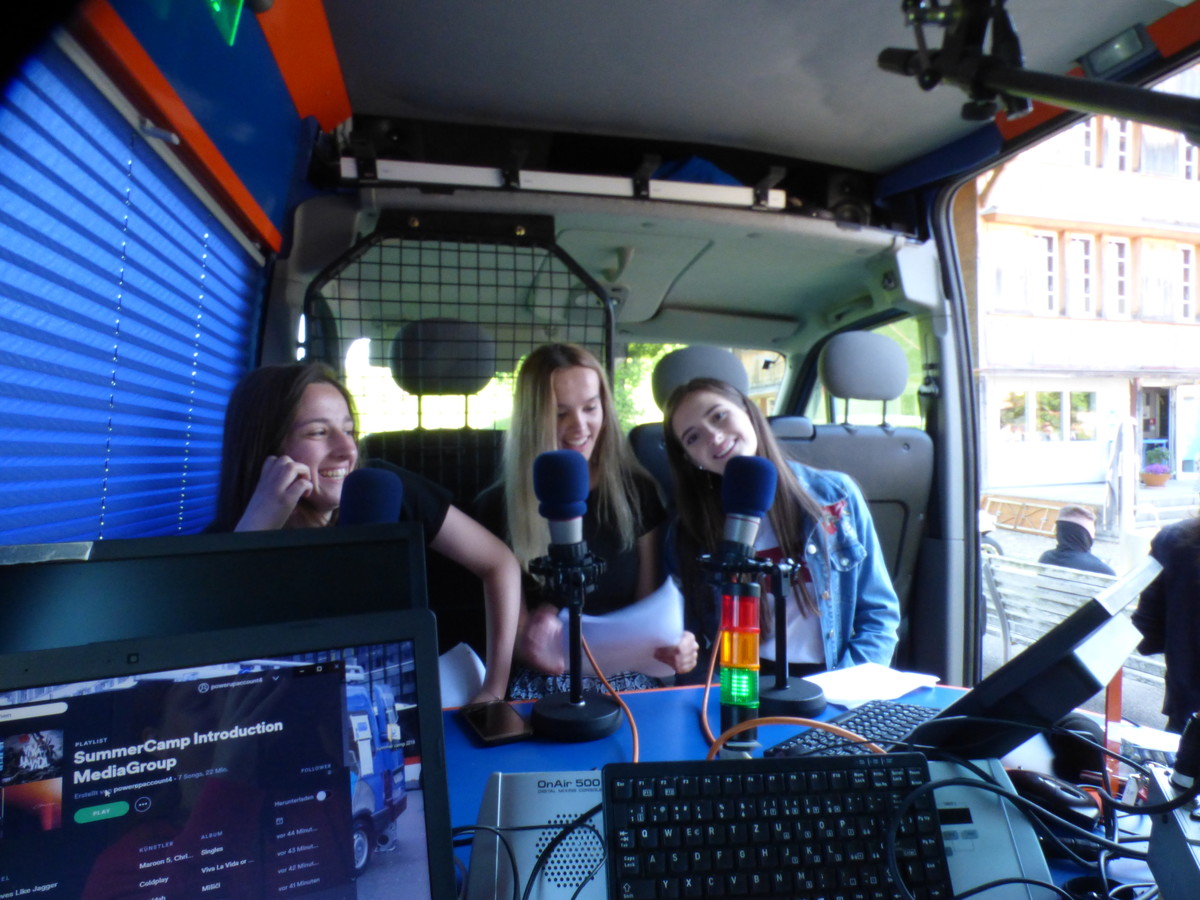 Yesterday was the evening that all of us were exited about. We’ve got to present our countries. Each group of people prepared an amazing material for everyone else.

A really interesting part was before the main performance. There was a kind of bazar where all the nations were represented. All of the countries let us tried their national food, some of them made a presentation how to cook it at all and someone made a masterclass showing how to make some interesting things symbolical for the country.

Afterwards everyone told us more about their country’s traditions, celebrations and some exciting facts about it. Each group made really cool individual presentation. The last one presented for us was a dancing for all who’d like to do this.

I think that this evening was really informative for everyone and it made all of us know each other and places they live better. 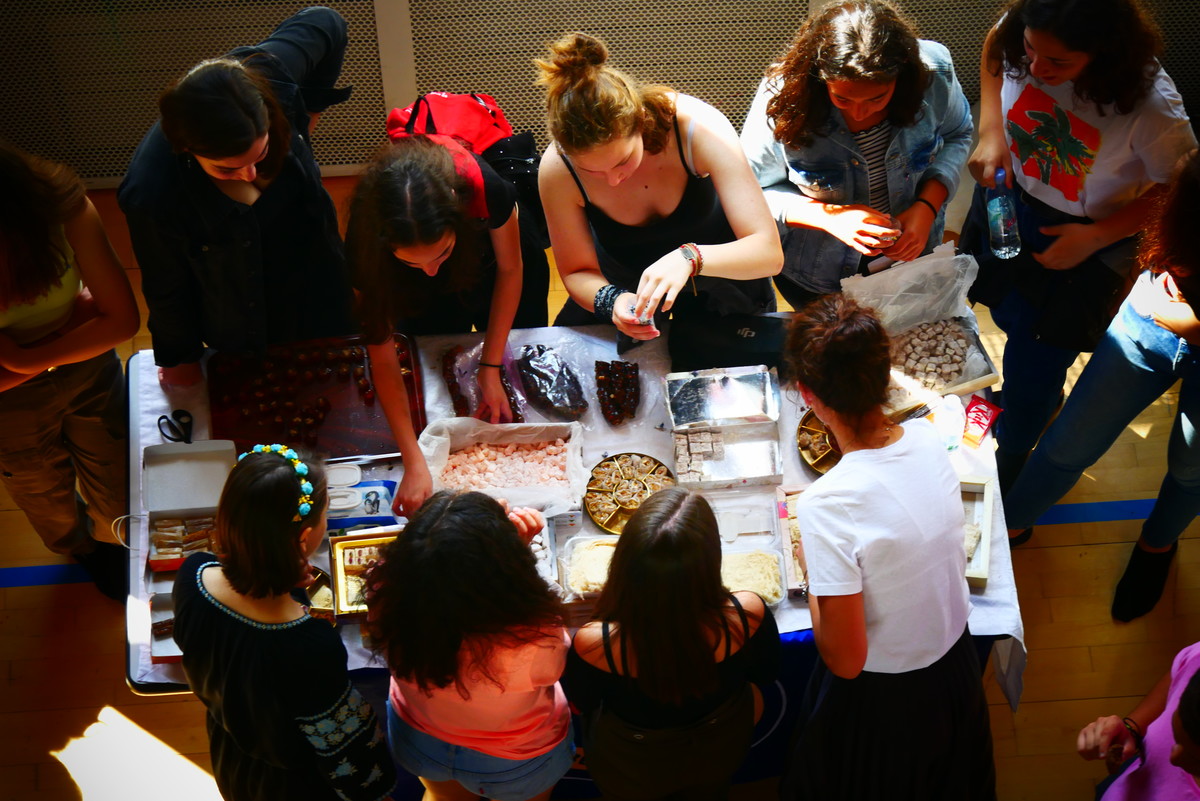 On the third day of our stay here, we assembly in main centre of the Kinderdorf Village at 10.15 a.m. After checking that everyone was ready, we started hiking on top of the mountain called Gäbris. During the tmie we were climbing, we saw beautiful views (you can see it below). I have to admit, hiking took us some time and we were all tired, but I think it was worth it. On top of the mountain we had a lunch (grilled sausage with bread and salad, and grilled vegetables for the vegetarians). That was tasty!

After the meal, everyone made a circle to celebrate that the sun came out from behind the clouds (it was a bit cold then). In the end we took group photo.

The descent was easier that hiking up. After the trip, we got ready for the presentation of our countries. 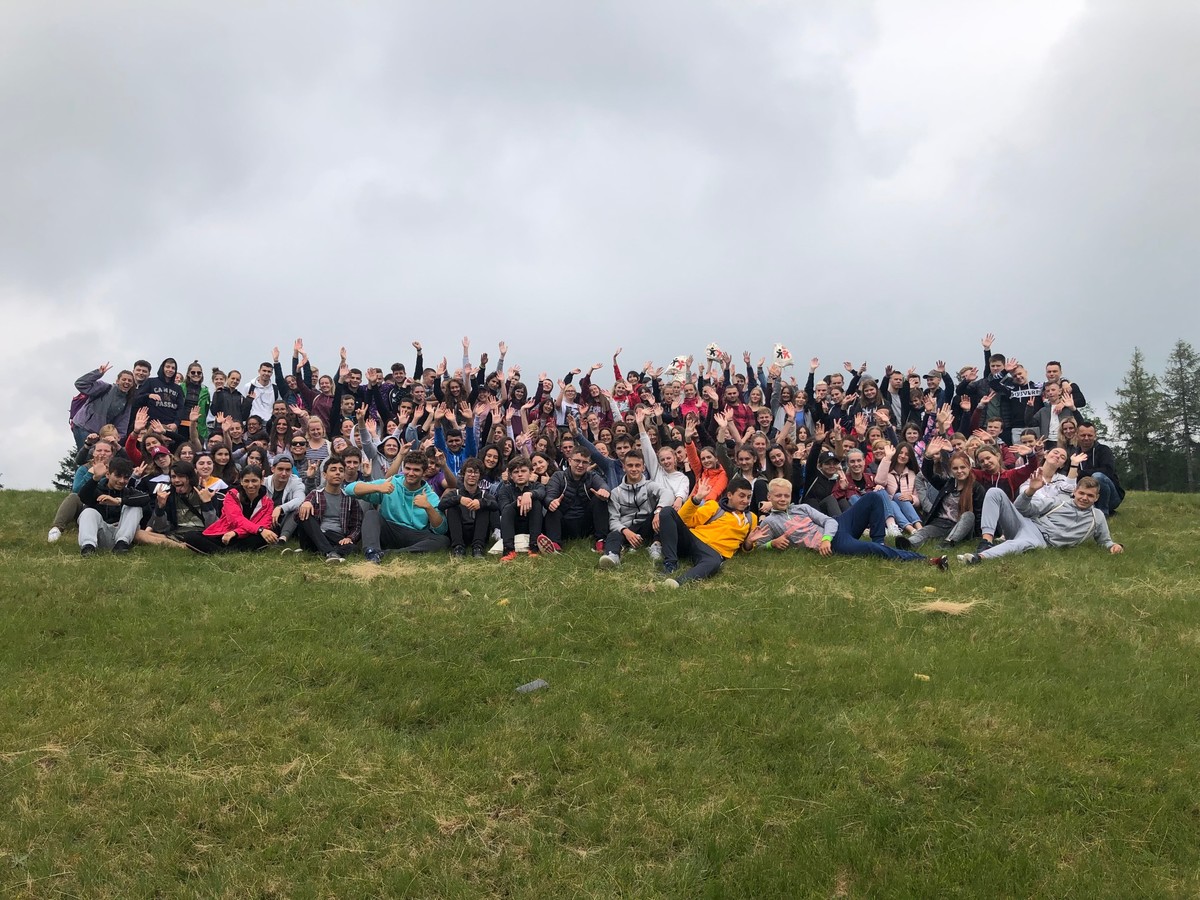 Monday was very hard but also so awesome day. It was not easy because of a lot of activities that we were able to do but Monday became amazing because these activities helped us to know our housemates, other children and village much better.

At first, In the morning our coordinators showed us village and also told us a lot of new facts connected with history of PCF. Then we had some games that helped us to learn all names of our housemates. Also we were able to create a name for our houses. As for 9th house, I suppose, it was the hardest part of the day because we had many cool ideas, so, it was not easy to choose just one. Then children used to make a short scene about meaning of their house name. It was really funny and wonderful to watch. Also after that we played some games helped us to trust our housemates. As for serious part, we shared our responsibilities and chose person who will try to protect housemates interests on assembles.

Evening was unforgettable because we took part in internal fire. In conclusion I would like to say that Monday was unbelievable.

Don’t forget to stay with our blog. 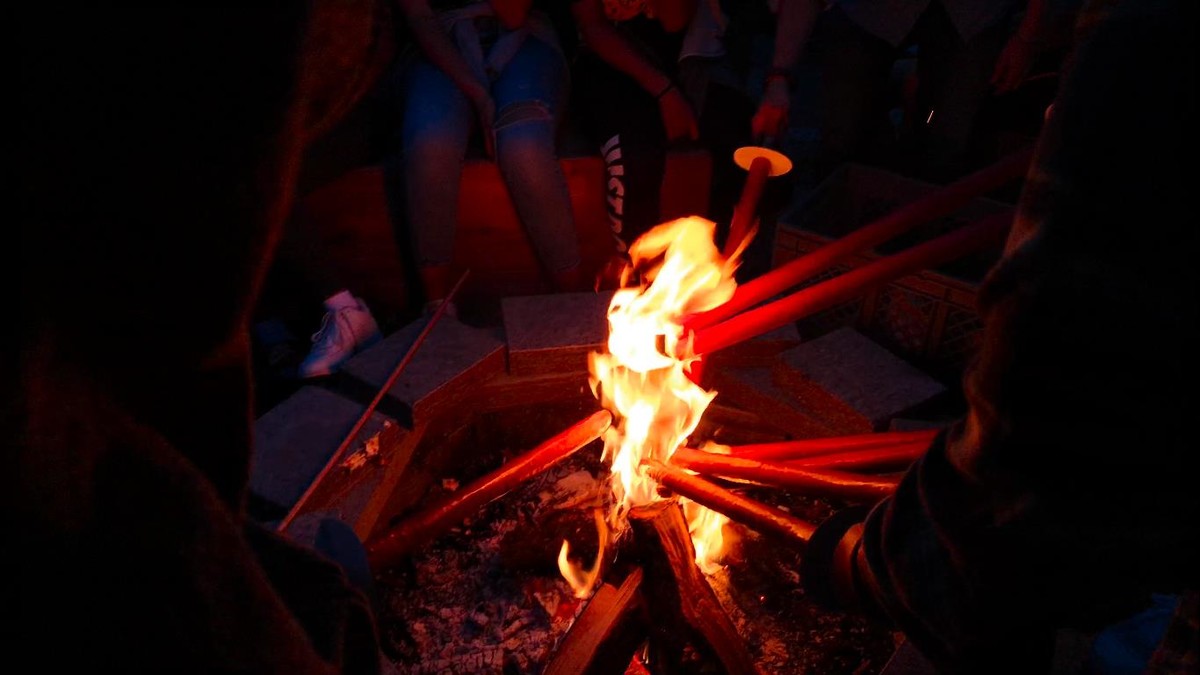 The camp area was bigger than we expected. There were so many houses for so much different activities. On the first day we were really nervous because everyone met near 150 strangers, but also, we guess, this day has become the most amazing for all of us because we got a chance to become friends with people from all over the world. We also have some tasks in our houses that we did as groups so it made us even closer. Of course we are doing the same things that we do back home, like washing the dishes, setting ther table, but when you should do it for someone else, it makes you feel more responsible. Moreover, the meals are a little bit different than in our hometowns. For example, I eat eggs, cheese and olives for breakfast everyday, but in the camp it’s a little bit hard to find them. So the camp made us change our habits.

The camp also made us more open-minded. On the other hand, this place made us more sociable because we have the chance to communicate with so many different people from other countries and getting know about each other's cultures. Even now, on the 4th day, we can feel the difference in ourselves. I believe that when the camp is over we will still have the connection between us, and maybe even later we will visit each other's countries.

If you have any questions, suggestions or any ideas, feel free to share. Don’t forget to follow our blog to know about the next news. Stay with us!

On the first day I was a little nervous, because I’ve never been so far from my family in a long time, or I had never driven such a long way, but in the end it was fun. In the last way with the Tram I wasn’t really prepared for a Storm, so I walked through the rain in T-shirt, sandals and shorts.

At first I thought people wouldn’t like me, but after I met all the amazing and unique people of the whole camp, I was just blown away by how nice everyone was. The thing that I’ve never realized is that everybody thought that I was older than I look and they get really shocked when they hear my real age. But in the Camp I felt really comfortable with such nice people around. Still, I have to admit, I still love my Alone Time. I was also really surprised that there weren’t really much Swiss people. It was surprising that we were having such long free time, and that we would be so independent. And the food is also really good too.

In the evening, I thought everything would be a little be chaotic, because there would be so many people, but I was wrong, everything was very calmed and organized. I am a very shy person that doesn’t like to talk a lot, or likes to be alone, but directly on the first day, I mostly hung out with the people around here and even talked very much, which is very unusual for me, but I think that I will have fun and a good time in this camp for the next two weeks. And I know that in two weeks, not everything can be so good like the first day, but that’s an important lesson to learn.